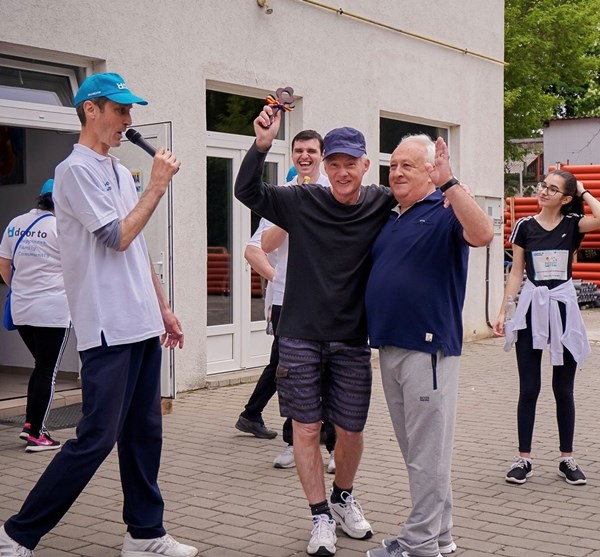 Beiuș, 20 mai 2019 – For Beiusians from Good Samaritan, it’s not only scholarships, medical or housing programs for young people from orphanages that represent a desirable impact in the community but also the transfer of expertise. On Saturday 18th May 2019, Good Samaritan participated for the third time as a partner in the annual relay “Companies for the Community” held in Radauti by the association Door to Home. “We went with our team with our general accumulated experience and specifically from the relay “Running for a cause”. The desire is to provide the know-how and to inspire other organizations and volunteers to do good in their communities.” Said Nikolina Ciorna, Vice-President of Good Samaritan.

The Bucovinian partners quickly learned the work method, each year involving volunteers from companies in the region, from the RuNNuuti club and local high school students, as well as raising funds from donations. This year they attracted two ‘novel’ volunteer runners: Nistor Tatar from Radauti and Peter Costea from Houston, Texas, USA. Living and working 10,000 km away, the first being the mayor of Radauti and the second, a lawyer established in the American metropolis. The two had never seen each other until Saturday, May 18, when both of them discovered a few things in common: a passion for running, plenty of grey hair and engaging in charitable action!

A more exotic runner for the Bucovina relay, the Bihorian Texan from Taut, fled from Romania before 1989 due to religious persecution, unable to study law at that time in the country. Being in Radauti on Saturday is not a new humanitarian step as he has been involved in his native country for 20 years and for the benefit of the Romanians living abroad. About the relay he said: "It was a great honour for me to run this mini-marathon, it's good for mind, body and soul. The family is very important, she needs a house, a home, but also a cultural and value dimension." Peter Costea is also the president of the Romanian Alliance of Families, an NGO for the protection of the institution of the family. Door to Home also takes cares of families in the living environment.

The novelty of this ngo-ist, volunteer, lawyer, activist for rights and freedoms, is the candidacy as an independent member of the European Parliament. With an impressive history in charity, in humanitarian actions, including for the benefit of Romanians from the poorer diaspora, Costea also wanted to visit the projects of the Radauti association. On 5th May, he also visited a similar neighbourhood, the Habitat neighbourhood in Beius, being received with bread and salt by the Beiusians in that community. "We have great hopes in an independent candidate with your experience, with a history of NGOs who helped the Bodnariu family take back their five children who had been seized by the state of Norway," said Nicu Sabau of Beius, upon the arrival of the Romanian-American guest. Nicu along with his wife Mariana is a beneficiary of a house in the Habitat neighbourhood in Beius.

In Radauti, the Bihorean born, resident of Texas, proposed a twinning with Houston as the relay baton was handed over at the end of the first segment by the Radauti Mayor Nistor Tatar. Pleasantly surprised, the mayor replied: “Well, why not?”

The Beiusians’ expertise was appreciated: “Thank you to the Good Samaritan association that joined us and guided us this year. We couldn’t have carried it out without them. I'm glad we can be strong in benefit of those in need.” said David Mariniuc, the Executive Director at Door to Home in Radauti. Who knows, maybe non-profit organizations will have one of their own in Brussels. “But it’s more important when Romanians give a helping hand and help each other or associations help one another, for Romania will be better, more beautiful," says Adrian Ciorna, founder of the Beiusian association, who also ran in Radauti on Saturday. For more information please call 0722-684679.