During the communist rule in Romania from 1948 until 1989, orphanages overflowed with children who were abandoned by families and individuals too poor to support them. Despite having a population of just 12,000 inhabitants, Beiuş’ orphanage in the 80’s housed up to 750 children. The orphans had difficult lives in the orphanages, receiving only basic food, inadequate clothes, limited education, and they were often beaten severely if complained.

A young adult orphan girl named GH shares her experience in the orphanage: „It was like in a prison. I don’t even want to remember it. The food was very little. We were more than 30 people sleeping in the same room. There were kids at different ages accommodated together. Everything that was given to us from the teachers or educators was later taken by the older orphans. They used to beat us a lot, for just about everything.” 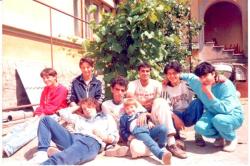 All the orphans waited for the day when they would turn 18, so they could leave the orphanage and start working in a job given to them by the government. After communism collapsed in Romania in 1989, the orphans were still forced to leave the orphanage when they turned 18, but the government no longer provided them with job assistance. As a result, the orphans often became homeless and wandered the streets without a job, a family or hope. Many were living in parks, under bridges, unfinished buildings, train stations, lives that led to stealing or prostitution.

"When I was 18, I was put out of school. I had no money, no clothing, I owned nothing. I didn't know where to go. I slept in the train station of Beius for six months with other kids. I was hungry", remembers GH.

”I stayed on the streets for 5 years and slept under a bridge. In those days I wasn’t interested what my life would be like in the future. Winter caught me on the streets and because I did not want to sleep in cold I would stay in a bar. But in order to stay there I had to clean it up and help when the supplies would come. I did not receive anything; I could just stay there during the night. One day I got sick and had to go to hospital. After I came back they did not receive me in the bar anymore.”- shares GS.

A young Romanian man saw the plight of the orphans and decided to try and help them when it seemed no one else would. Initially, Adrian Ciorna and his mother opened their home for two girls and provided them with a bed, bathroom, food and most importantly love and acceptance. Adrian and his mother continued to open their home for more orphans and tried to assist them in finding work and a new life. 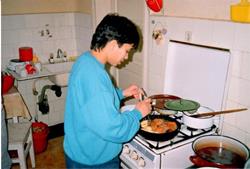 GH, one of the first two girls taken under Adrian’s care, remembers, “One day I and a group of other teenagers were asked to leave the orphanage on the next day. When we left, we didn’t have anything - neither clothes nor even a mattress to sleep on. The teachers didn’t offer us any advice as to what we were supposed to do. It was very hard. I stayed on the streets for about 2 months. I started working here and there taking small jobs, but didn’t have anywhere to sleep. There was a group of us living on the streets, staying together. This continued till I met LK, an orphan like me. He told me then: “Do you know the Ciorna family? Let me bring you to Mrs. Ciorna.” When we went there I received some money and could buy some food. On the second day after talking to Adrian I got accommodated in their house. Later Mother Maria taught me how to cook. I could stay there 2 years and could find a job.”

In 1993 Adrian Ciorna founded The Good Samaritan Association, a non-profit organization in his home town of Beiuş. “I learned a lot about their tough life, and God changed my world view - from focusing on my business career to serving people in need. Life was tough for these orphans: They were turned out on the streets at age 18, there was prejudice against hiring them, they were under-educated and had no life skills. I then founded a local orphan integration program with the goal of finding international sponsors for these young people to help support them while they learned life skills and established an employment history.”

In those years tens of youngsters were annually appealing for the help of the association.
“Soon, through part-time volunteer work as an interpreter, I learned of Habitat. I thought it was an amazing opportunity to help people help themselves. Even so, it was, for me, a dark day when I left my full-time work with the orphans to join Habitat as national coordinator in late 1995. I wondered, "What will happen with the orphans?" Until I had served the illiterate or blind, street kids or poor, the homeless and hopeless, I didn't know love's depth. In 1998, FS, an 18-year-old orphan, came to me. He said, "I know you use volunteers with Habitat, but give me some work as well. I need to survive." God opened the doors. Some of the orphans came to work on the Habitat site in a one-year employment opportunity. “

Since 1993 Good Samaritan has assisted more than 200 young adult orphans and their children in the cities of Beiuş, Oradea, Timisoara and Cluj. Turning 18 they were helped to learn a profession in one of four vocational programs (carpentry, construction, cooking and agriculture) and create an employment history, while jobs in those years were so limited. The street life for these and many others is behind them.

Today, Good Samaritan continues its mission of providing disadvantaged youngsters from state and private orphanages with the skills and opportunities to socially and professionally integrate into society, while showing them Christian love, care, support and Jesus Christ’s model for living extending its experience of so far 20 years to other communities too.